Vermiculite is a type of phyllosilicate mineral that resembles mica in appearance. It is composed of silicon, aluminium, oxygen, hydrogen, iron and magnesium and is found in North and South America, South Africa, Uganda, Zimbabwe, Kenya and Russia. Deposits are extracted using open cast mining techniques. In some mines, notably in Libby, Montana, asbestos is found with the vermiculite, so, since 1990, all mines have been tested for asbestos contamination.

When vermiculite is heated, the moisture inside turns to steam which causes it to expand. This changes the dense flakes into granules which can end up thirty times their original length. This process is known as exfoliation. The first recording of this phenomenon was made by Thomas H Webb of Massachusetts in 1824 after he had been experimenting on what was then regarded as a variety of talc. He proposed giving it a new name and suggested vermiculite, derived from the Latin 'vermiculor' which means to breed or produce worms, as it descriptive of the exfoliation process. No useful applications of vermiculite were developed at the time and mining did not become a successful commercial proposition until the 1920's.

Exfoliated vermiculite is light, clean, safe, non-combustible, has low thermal conductivity, undergoes minimal shrinkage at high temperatures and can hold moisture. These properties have enabled it to be used in a variety of ways, principally as insulation and a heat resistant barrier but also in horticulture to hold nutrient laden moisture, as acoustic panels to deaden sound and as packaging for fragile items or hazardous substances.

Mixed with a polymer adhesive, vermiculite can be pressed and shaped to create vermiculite boards, which look similar to plasterboard and can be cut, drilled and further shaped with ordinary carpentry tools. Heat resistant adhesives are available for fixing the boards to bricks or blockwork and for filling in at the joints.

In the context of thermal vermiculite insulation and resistance to high temperatures, our board is used in the interior of fire doors, to create fire barriers and protect structural steel and metal ducts and pipes within buildings. In industry, and to enclose and protect steel to make shelves in kilns, Domestically, boards are used in fireplaces, and to cover areas around wood burning or other solid fuel stoves, range cookers, or any other area where building regulations require a safe distance between high temperature surfaces and combustible materials.

For stove fitters, vermiculite boards have a number of applications to make the job of installation easier. In instances where there is no existing chimney and a pre-fabricated flue is fitted, the board is useful for boxing in. Within an existing fireplace, the board makes an ideal register plate which holds the flue liner in place during installation and protects the stove from any falling debris. Vermiculite insulation board can be used to line the back and sides of fireplaces including large inglenooks. Boards with textured surfaces or made to resemble bricks give a decorative finish and the boards can be given a coat of heat resistant paint to match the room's décor if desired. 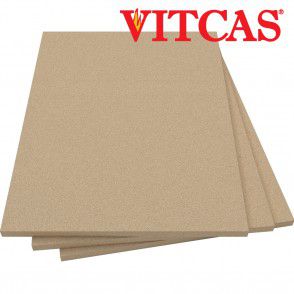 Vermiculite board is an insulating board from a naturally occurring aluminium-magnesium silicate mineral. Non-toxic and environmentally friendly. Vermiculite board can be easily used with wood working tools.
go to shop read more 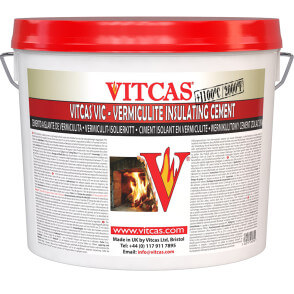 Vitcas Replacement Vermiculite Gas Ember Pack. A packet filled with crushed vermiculite granules. It has to be spread directly onto the burner tray to be more energy efficient. Resistant to 1100oC / 2010oF.
go to shop read more